Online surveys are empowering your loudest residents. Here’s how data management can change that 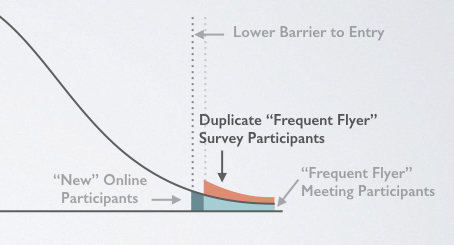 When you hear the words “public engagement” what comes to mind?

Most certainly not Data Management.

But what if data management just happened to be the key to highly effective, transparent public engagement?

Public engagement feels like an intuitive function of governance – but things have changed a lot from public engagement’s early roots, and there are ever-growing challenges facing modern engagement practitioners.

The humble beginnings of public engagement

The forum was engagement at its simplest: face-to-face participation where each voice could be traced to a specific individual – an individual with known demography, interests, and community representation.

Today, while much has changed, some hasn’t. Democracy, at its best, conveys the voice of the people to the institutions built to serve the people. But the tools, channels, and means of conveying that voice have multiplied.

As those channels have multiplied, complexity has reared its ugly head, making the simple act of listening into something much more involved than once encountered. 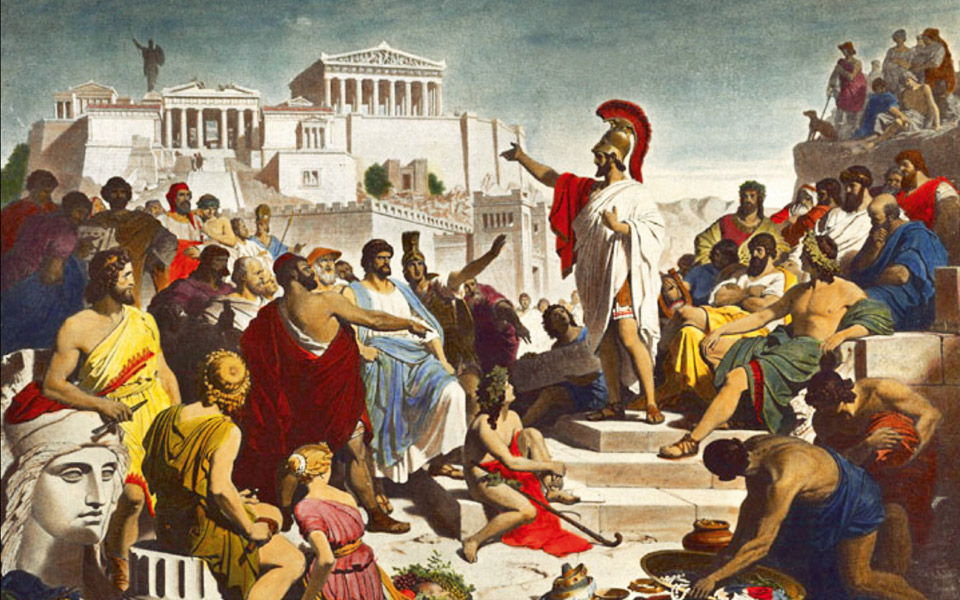 Centuries later, the format of in-person meetings persists as the primary means of listening to the public.

For the purposes of naming conventions, let’s call this “old school” engagement. It’s tried and true, and as old as democracy itself.

But there are some obvious drawbacks: space and time prevent most people from attending, except for those with the strongest interests and opinions.

The result is a select group of participants that are more vocal and influential than 99% of the remaining population in a community. These “frequent flyers” tend to be a common phenomenon in many communities. Ralph Nader went so far to characterize the situation as “There is the town fool, the town drunk, and the town citizen.”

Sticking with this old school approach tends to yield participation from a small, vocal cohort: 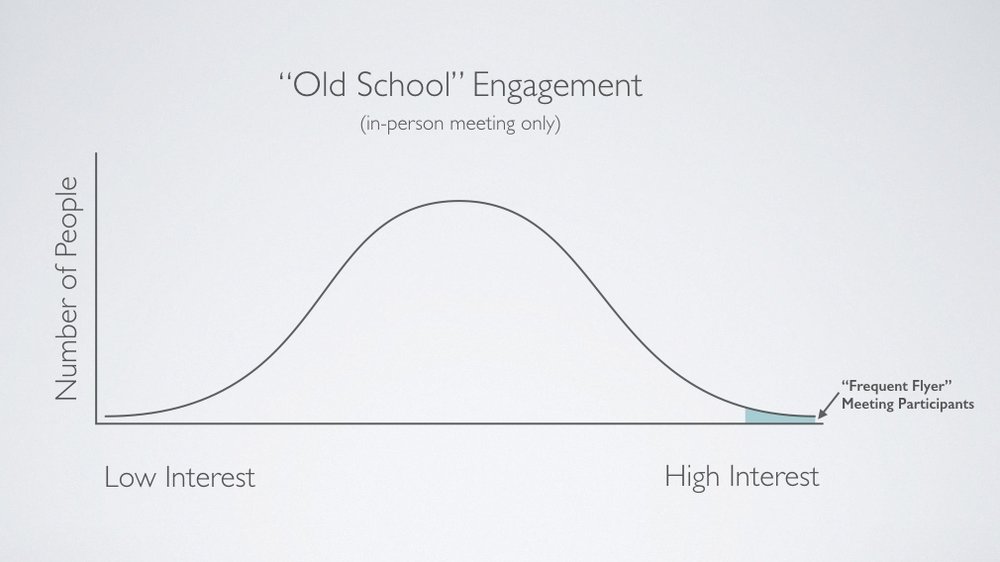 When meetings are the only form of engagement, the process is dominated by a very vocal handful.

The dawn of online surveys

In the 2000’s onward, a number of web-based solutions emerged promising to expand engagement beyond the frequent flyers.

Great advances were made from an accessibility standpoint, but many of these tools failed to reach their potential because of the “if you build it, they will come” fallacy.

What happened instead is more troubling – because outreach efforts did not improve much upon the traditional notices and email newsletters, few new participants were actually reached.

Adding to the challenge, the vocal handful of offline participants are typically the primary participants in these new online formats.

“More” engagement is not always synonymous with “better” engagement. The duplication of the most vocal voices is a real dilemma, and often invisible to even well-meaning engagement practitioners. We call it the ‘Double Voice’ dilemma.

Let’s illustrate the concept with ‘Double Voice Dan’. You may know this person – a committed, nearly-full-time citizen. Dan’s voice is heard loud and clear at the public meeting, but without identity and data management, his voice is duplicated in the online survey: 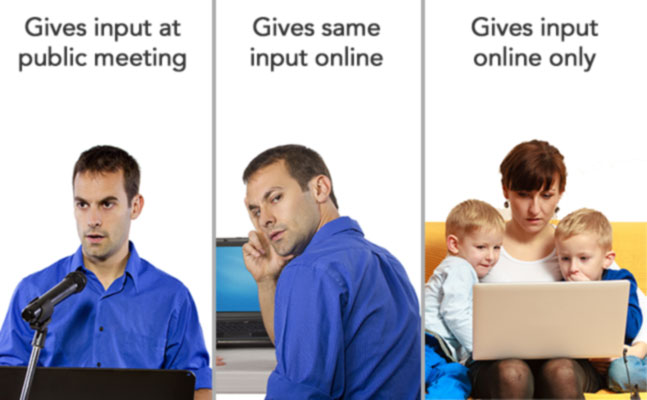 The result is a process that intends to give marginalized voices a say, but instead allows the most motivated participants to exert more influence over the public process. 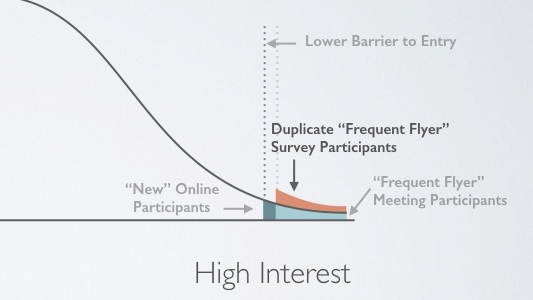 The result is increased risk exposure for decision-makers.

Standing up to the loudest voices tends to be more difficult when they have twice as much validation of their viewpoint as ‘the majority’.

Combating the marginalization of voices

To recap, the two biggest problems of online+offline engagement are:

To prevent these issues we must first clarify the unique identities of the people with whom we’re interacting. This requires collecting unique information from individuals both online and offline.

This is a default component of PublicInput.com’s kiosk, meeting sign in, and live meeting response tools, but it can also be done using traditional formats like paper or excel spreadsheets via name, email, and phone numbers.

As you collect this information, tie it to individual responses, concerns and questions. This will be important for cross-tabulation later.

As part of any online survey, you should collect participant names and emails, and if possible phone number and address. This should be fairly straightforward.

If possible, collecting an IP address can help with detecting attempted ‘ballot box stuffing’. If you’re using PublicInput.com, IP address detection is enabled automatically, and you can configure your fraud detection thresholds on the settings page.

Either way, if you can collect IP addresses and participation timestamps, you should be good to go here!

data management ties it together

Once you’ve collected responses offline and online and have your identifying information organized, it’s time to collate.

Doing this in excel can be done with vLookup or the consolidate function. The key is to organize each unique identifier (name, email, phone) in its own column alongside the timestamp of the meeting or online survey response.

Doing this allows you to tie “one voice to one vote” based on the most recent response from a participant on a given issue.

Consolidating this will most likely reduce your total participant number, but now you’ll have a clearer understanding of public sentiment and provide under-represented voices equal footing with their more vocal peers.

Looking at our original diagram, the net result is more voices, without duplication and marginalization: 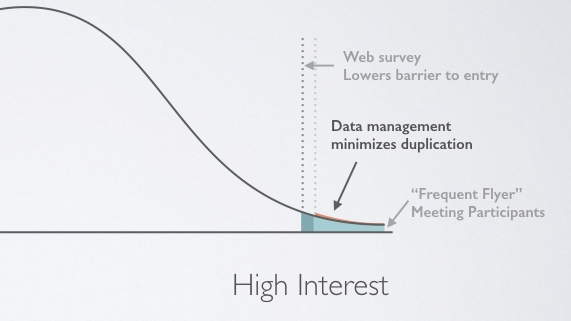 With data management , online surveys perform their intended role without the risks of duplication and marginalization.

These functions are built into the DNA of the PublicInput.com platform, and are the driving reason for making offline tools like meeting mode.

This is a critical component to building public trust, especially at the local and state level.

As social media has emerged as an official channel for public communication, engagement is entering an exciting new chapter with lower barriers to entry and new ways to reach people.

Many cities have learned the hard lessons of the time-consuming elements of social media, from building a following, to responding to a wide array of requests.

This becomes even more challenging when social media outlets are constantly tweaking who gets organic access to their audience.

Innovative organizations began using these targeting tools in early 2013 and 2014, and as social advertising’s ease of use has increased, more organizations are tapping the power of networks like Facebook and Instagram to zero in on the people they need to reach.

Done properly, agencies can vastly increase access to resident stakeholders while upholding the integrity and trust in the public engagement process. The key again is applying a disciplined data management strategy.

Identifying unique voices from social media in the context of survey and meeting data is challenging, the best place to start is again with unique participant names. If you’re a PublicInput.com client, by default you’re also connecting a commenter’s social ID via API to check against logged in participants.

If you’re tech savvy, you can also do this by looking up your post on various social API explorers and exporting the data to your unique respondent table. Again, this is where modern engagement tools can help do the heavy lifting.

From newsletters to automated email endpoints, unique identity is a bit easier to manage. Comments received and forwarded to PublicInput.com will automatically be connected to participants with a matching email address, but if you don’t have an email management solution, this can be done manually with your unique participant spreadsheet.

As long as email comments received are associated to matching online and meeting participants, you’re 90% of the way to one-person-one-voice. On projects with less than 100 participants, it’s also worth a check against participant names if you receive emails from unusual domains or emails tend to echo the same position or sentiment.

All things old are new again! Given the simplicity of text messaging, the near-ubiquity of text-enabled phones, and the ease of use for residents on the go, this is a great venue to improve engagement.

If you’re collecting phone as part of your meeting sign in or online survey, you can easily associate these responses back to unique participants. In PublicInput.com, this is done automatically when a participant responds via text.

If you’re not using PublicInput.com, you can also work with SMS providers who provide data export, then use the excel methods mentioned earlier to assign responses to unique participants.

Data Management ties it together

As with earlier, making connections to ensure ‘one person one voice’ depends on collecting the dots, then connecting the dots (credit Danny Meyer for that concept).

Seeing these layers converge on our diagram illustrates a public engagement process that is increasingly inclusive, transparent, and well-managed: 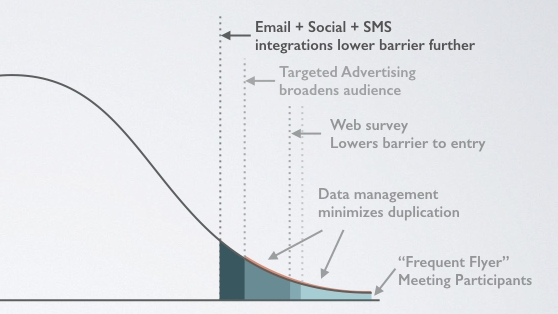 Taking the next step

This is a ton of ground to cover in one post, and admittedly, it could be better delivered as a series on public engagement data management, but hopefully this brings some new light to what’s involved in effective public engagement in today’s environment.

We’d love to support you in your work, whether its moving engagement beyond the same vocal few, or simply providing an easier way to manage your existing processes.

Feel free to drop us a line at [email protected], or setup a free web demonstration here:

When things go sideways, rebuilding trust starts local
Yesterday, an unprecedented attack on our nation’s capitol left many of us shocked, saddened, and discouraged. How could this be real? A violent mob forcefully took control of the legislative...
20 Likes

Leverage EJSCREEN data in PublicInput.com – meet the Environmental Data Module
You work hard to make sure your public engagement efforts are equitable. Before your project's public participation outreach begins, you try to anticipate the needs of your community. Where should...
22 Likes 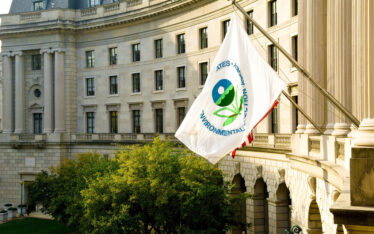 Navigating the “new NEPA” — What MPOs & DOTs Need To Know
The National Environmental Protection Act (NEPA) — a pillar of environmental law that has undergone little reform since its creation 50 years ago — saw major rollbacks this summer after...
72 Likes